Matt Lewis, Special Events Director for the Si Se Puede Foundation, stands in front of the presentation board for Community Team 17098 (“The Warriors”) during the State competition of the FIRST® LEGO League
< www.firstlegoleague.org >  Robotics Tournament. The tournament was held at Arizona State University’s Tempe campus on Sunday, Jan. 19, 2020. (Photo credit: Unknown, possibly Greg Lewis or by Keith Kagen Photography <https://kagenphotography.wixsite.com/photos>) 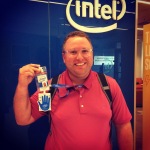 is an Arizona native. He was born in Mesa, Ariz. and raised in the greater Phoenix-metro City of Chandler (also known as the East Valley). He attended Sunrise Pre-K; Hartford Sylvia Encinas Elementary School (a Chandler Unified School District public school); D.W. Higgins Institute for Middle School / Junior High School (a charter school stared by a family of educators); Basha High School (a Chandler Unified School District public school) and The University of Arizona (Arizona’s first land-grand, public research university) for undergraduate and graduate-level studies. For his undergraduate studies, Lewis majored in Journalism and minored in Geography and Regional Development.

Most recently, Lewis has served as Store Manager of a chain of Dry Cleaners (GreenClean Dry Cleaning). He will shortly begin a new assignment at Intel Corporation‘s Chandler Campus working in the Assembly and Test Technology Development (or ATTD) division.

In his spare time, Lewis is a golfer and loves exploring, watching movies and hanging with friends.

Lewis has held a variety of other jobs before entering the semiconductor industry.

In addition to his work, he also cherishes his volunteer work with the Si Se Puede Foundation (SSPF); which is where he has served as Special Events Coordinator for the better part of a decade.

His brother, Craig, was the first in the family to join the Si Se Puede Foundation’s (or SSPF) ‘Robotics’ clubs. Later Greg, Lewis’s father, began volunteering; and Matt would eventually follow suit as well.

Not long after he began volunteering, his role quickly evolved into something more.  Lewis was involved with several of SSPF’s programs, including the ‘Youth Soccer’ league, the Science, Technology, Engineering and Math (S.T.E.M.) initiatives; and also the ‘Scholar’s’ Programming. His talents did not go unnoticed, as he was asked to take on more and more responsibilities.

Lewis is interested in a number of subjects; and from an early age, he loved to read and write. He was determined to become a published novelist of fiction.

In elementary school, he even a published book (as part of a school project; but still … Goal = Accomplished!).

Once he realized being an author was a tough and often not so lucrative career, he decided to look elsewhere. In high school, his English teacher liked his writing and suggested he join the school’s newspaper. It was during this time that his love of Journalism had been planted; and began blossoming.

His first major story to cause controversy ( – and a sense of pride in his work – ) was on the treatment of Homosexual students at his school. He wrote the story with an introspective approach, first thinking about how he had been treating Lesbian, Gay, and Queer students; as well as how the school at large treated such individuals.

He framed the story using an anecdote about a young man who was killed simply because of his gay lifestyle.  The powerful imagery and the political and personal nature of the story struck a chord with readers, parents and administrators alike. Several students (or more than likely parents) complained about the subject matter addressed in the article. The entire staff and the school administration backed Lewis’s reporting. Another big story Lewis tackled (with a great sense of irony – he might add) was drug and steroid testing that began during his Senior year of high school. Lewis was on the golf team and after the article came out, he was “randomly” selected to be tested. He determined it to be irony since the Golf team had no need for using steroids ( – as Golf is not a game of pure strength – ) and most of the team was on the honor roll — they had no time to use drugs.

After high school, Lewis dove deep into the World of Journalism. He joined his college newspaper, majored in Journalism, took on several newspaper internships, and even served on the executive board of several professional development organizations.

END_OF_DOCUMENT_TOKEN_TO_BE_REPLACED

Matt Tweets Around the Globe